Posted by Milwaukee Sketch Club at 11:41 AM No comments:

These are 6 week sessions meeting on Thursdays. To see his work and get more information on his classes see his website, http://fredbellpaintings.com/
Posted by Milwaukee Sketch Club at 9:10 AM No comments:

These are ongoing classes offered on Wednesday and Saturdays, where you can work at your own pace with individualized instruction in any drawing or painting media. For more information on dates and times contact James (Jim) Hempel at jwhempel@hotmail.com . To see his work see http://www.jameshempel.com/

Posted by Milwaukee Sketch Club at 9:03 AM No comments:

About the Milwaukee Sketch Club

The Milwaukee Sketch Club meets every Tuesday evening (7:30 - 9:30pm) from the first part of September through May at St. Peters Episcopal Church at 80 st. and Lincoln Avenue in West Allis, Wisconsin.

We welcome new members that are interested in painting and sketching. Artists can use any medium of their choice except for oils because of the solvent odor. If the artist uses a messy medium we ask that they bring a drop cloth or something to cover the chair they are using for supporting their materials and the floor beneath them. Our fees are $85.00 for the year. See the October 10, 2009 posting for our updated 2009 winter schedule.

We also have plein air during the summer with some hearty artists continuing into the colder months. They meet at different interesting areas each session. (See previous blog postings) The plein air is free.
Posted by Milwaukee Sketch Club at 11:17 PM No comments:

Looking for clothed portrait models to pose for pay 2 weeks in a row on Tuesday nights from 7:30-9:30pm. Email msc1922@gmail.com if you're interested.

Posted by Milwaukee Sketch Club at 8:32 PM No comments: 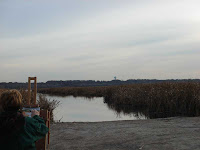 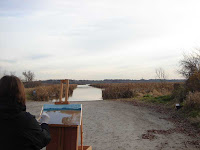 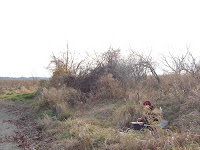 It's getting cooler but still not too bad. If you're painting with a brush you can poke your brush through a wool sock and hold it like normal within your sock. Definitely long underwear, winter coat and hat weather.

This week we're still out in Mukwonago on Thursday.

Next week we will have off for Thanksgiving.

Then the following week we may do Tuesday afternoon at 1pm in Milwaukee/Waukesha area and Thursday at 2:30pm in Mukwonago.

Posted by Milwaukee Sketch Club at 8:05 PM No comments:

Michael Foster, http://michaelfosteronline.com , is an oil portrait artist and teacher. He has a Masters of Art in Visual Studies from Cardinal Stritch University and has exhibited in several shows including solo shows at the University of Wis. Waukesha and the Sharon Lynne Wilson Center, Brookfield Wi. See his website for his work and current exhibitions.

He demonstrated a larger than life oil portrait at least 4' x 4' on a braced masonite panel, gessoed then wiped with burnt sienna. He worked from a black and white photo so he could visualize the color mood. He works with values, form, questions of form and chooses his own colors.

His first step was to rough in the locations of the face's features with charcoal. First getting the size and placement, Then working on the tilt and turn. He compares what is unknown to what is known, relates it to the whole. If something doesn't seem to be right, cover it with your hand and it will jump to the right place so you can correct it. He started by roughing in the top and middle of the head, then the chin. Then the middle vertical, tilt and shoulders. Then eyes, brows & nose, then eye width and nose width. Then hair & forehead.

He decided on a dominant complementary color scheme of purple and yellow, with a secondary complementary color pair of green and red. He started by blocking in the large dark shapes with purple, then put in the primary light source with yellow-green and the secondary light source with alizarin. Then colors were continually refined while remaining in the same color scheme. Areas were lightened with white and yellow.

He applied the paint directly from the tube to the painting. Colors were mixed directly on the painting. He used several bristle filbert brushes so didn't need to keep cleaning brush. He worked from large to small shapes. When correcting he paints right over the form, then once it's right he wipes out the error. He used the directional flow of the brush strokes to sculpt and carve out the forms.

He tries to get the entire painting as close to done in one sitting. Then lets it dry several days before reworking and glazing. If he doesn't like a particular area's texture he peels it off with a palette knife or sands it. He says when you paint a lot things happen faster.

He uses a very thin layer of retouch varnish applied with sponge brush on his paintings. It can be carefully wiped off with solvent and Viva paper towel if painting is dry before applying.

He takes his own photos using a canon sl and mostly one light source with a white card reflector. You can see his photos on his website that he built this summer using http://otherpeoplespixels.com/ that his friend Tom who is an abstract artist recommended.

All in all an excellent demo.
Posted by Milwaukee Sketch Club at 8:06 PM No comments:

One of our members, Joyce, is exhibiting in this exhibit.

James Hempel, jwhempel@hotmail is offering both Wednesday and Saturday classes in the morning and evening.

Fred Bell, fred@fredbellpaintings.com is offering Thursday morning and evening classes.
Posted by Milwaukee Sketch Club at 10:11 AM No comments:

Milwaukee Sketch Club at a garden near Lincoln Parkway 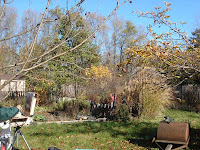 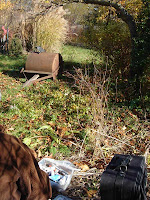 On Tuesday, November 3rd, we met at member's yard and the garden scenery was so intriguing that we decided to paint there.

It was cool and we needed our hats and gloves. Somewhat warmer to stand rather than sit unless you have a hunter's cushion.

Next week we will be meeting on Thursday, November 12, at 2:30pm at Vernon Marsh
http://www.dnr.state.wi.us/org/land/wildlife/wildlife_areas/vernon.htm

Take 43 to hwy 83.
Take hwy 83 north past Pick n' Save
Take a Right on Frog Alley (this road is labeled Sugden on the left)
Go all the way to the parking lot on the end.

Hope to see you there. Email msc1922@gmail.com if you'd like to meet up with us.
Posted by Milwaukee Sketch Club at 9:43 AM No comments: 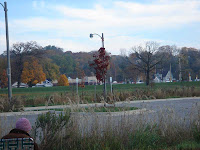 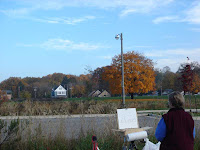 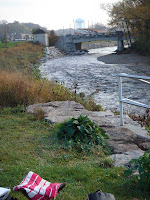 Early in the morning it was quite chilly and the grass was wet. However by the time we left it was sunny and quite pleasant. Fall color very good.

Next Tuesdays (11/3/09) Plein air will be on Lincoln Parkway and 54th St near Hampton ave.
Posted by Milwaukee Sketch Club at 7:10 AM No comments:

Milwaukee Sketch Club
The Milwaukee Sketch Club was started in 1922 by a group of professional men who decided to get together to paint & sketch. Now women are also members. In winter we sketch and paint live models, both draped and undraped, have art demos and critiques. We also invite anyone who is interested to come along on our loosely organized Urban Sketching and Summer Plein Air Painting Adventures. We offer No Lessons, although many of our members teach art. Instead we support and encourage each other in our artistic endeavors. ANYONE and EVERYBODY is welcome to join. msc1922@gmail.com